The University of California Education Abroad Program (UCEAP), sends about 5,000 students abroad every year to inspire them to explore and transform their lives. UC relies on software to coordinate all the work of accepting applications, placing students, collecting payments, collecting grades, and keeping students on track while abroad. That software had been named “MyEAP”. And in 2019 it had turned 10 years old. It looked its age and it had no new features since 2013. UCEAP hired Logic Branch to re-engineer that software with the goals of increasing customer (i.e. student) success, staff productivity, and in the end, the number of students being sent abroad.

So, how to increase enrollment without increasing workload? From the outset, we knew that our new software couldn’t be a simple replacement of the old. It needed to not just be a more modern system, it needed to do more. It needed to

In short, it needed to be transformational.

Our improvements started outside of the software. The new system is not just new software, the new capabilities began with reworking how UC structures its programs.”

The limitations of the old software went beyond a lack of new features. The old aesthetics harked back to the childhood of it's primary users: 18- 19- and 20-year-olds. Their MyEAP user experience went from visiting a modern UCEAP website which helped grow their expectations and excitement to starting their application process on MyEAP — a disappointingly different online software interface and expectational mismatch that damaged their trust. It wasn't even usable on a smartphone.

For the staff user, they needed to put in extra work to make up for the software's limitations. They dealt with endless stacks of forms and documents. They needed countless Excel files to report on enrollments, pre-departure check-ins, budgets, course credits and grades. They dealt with a tremendous amount of manual work going into billing students, dealing with financial aid and handling myriad exceptions and edge cases. Everyone needed change.

In order to unburden the users, we chose Drupal because it offered several key advantages over other technology options. It not only offered the best return on client investment, but it also offered the best return on innovation, removing complexity without compromise to growth or risk avoidance. It had the potential to bring UCEAP's IT efforts into a virtuous cycle of continuous improvement.

Our improvements started outside of the software. The new system is not just new software, the new capabilities began with reworking how UC structures its programs making it more like the familiar process of shopping for, perhaps, a car. The users decide first on a program: “Customize Your Coursework at an English University” becomes their “Honda Civic”. The users then decide on a package: “Spring 2020 at King's College London” becomes their “2019 Honda Civic EX in red with standard CVT”. 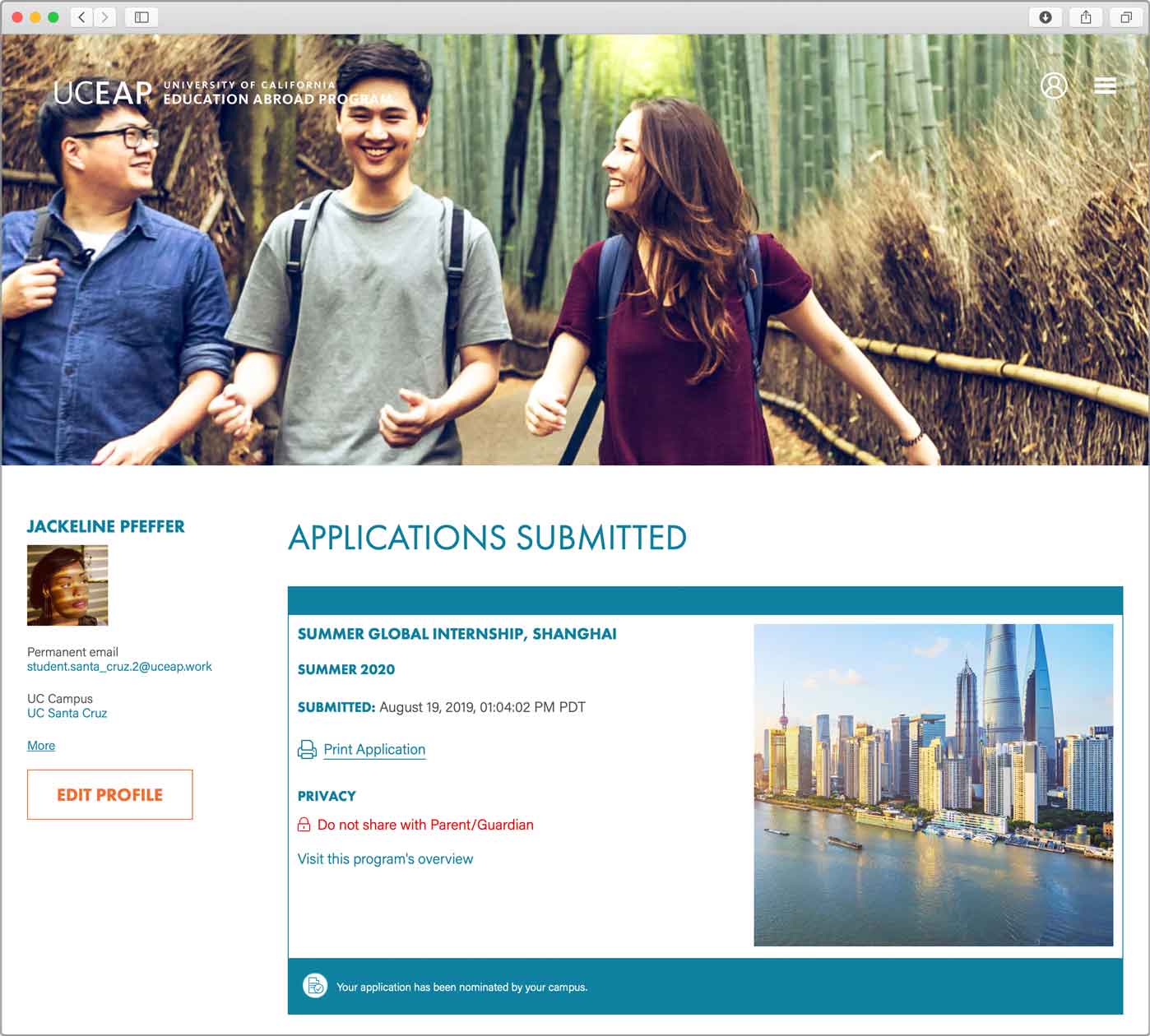 For the staff users, we improved student searchability and added document uploads and support for transfers. They now have a central point of record with live data-driven views. In coming releases of the software, they will have advanced tools for safety and emergency response for their students abroad and for tracking grades and changes to the course catalog.

The new system facilitates advanced ad hoc reporting by creating a data warehouse. We put great effort into the database which improves reporting capabilities by making things more consistent (numeric IDs, taxonomies, select lists, etc.). Automation features enable the updating of fees such that periodic changes propagate downward from campus and program fees all the way to the student.

We addressed the experiential and interactive concerns as well. We ensured synchrony between the students' program shopping experience and buying experiences; the same interface theme and behaviors apply all the way around and all are responsive for use on any device. We selectively modified the staff interface design to take into account their heavy data-driven use.

The changes are all in a flexible system, which means it's easy to change or add functionality in the future. Automated feature tests are created with each new feature and the tests are run with every change in the software to make sure any regressions are caught and fixed. The hosting system plays an active role in keeping things secure and can proactively block vulnerabilities before they become public knowledge and until they are patched.

We publicly launched the new software in June 2019. Like our semi-weekly Agile releases of new functionality to project stakeholders, it was a quiet launch with no surprises. Now student and staff users can more fully enjoy the transformational experiences they are fortunate to be a part of. We are happy to help their adventures continue.